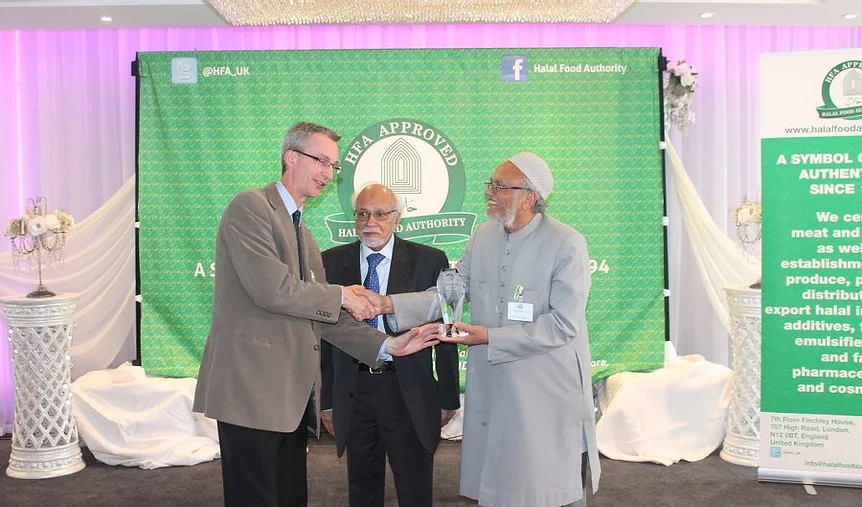 RECENT AND POTENTIAL DEVELOPMENTS IN THE HALAL INDUSTRY

A short report on the HFA Seminar held on 30th April 2015 We at the Halal Food Authority (HFA) hosted our first industry focused event last Thursday (30th April 2015); held in the Imperial Suite at Royal Nawaab London. Our seminar on ‘Recent and Potential Developments in the Halal Industry’ attracted over 140 industry personnel – from representatives from major corporations such as Unilever, Kelloggs and KFC, smaller independent businesses and a host of media keen to cover the event. Hosted by the much sought after Rahim Jung, the event was opened by our Chairman, Dr Ghayasuddin Siddiqui and followed on by our CEO Saqib Mohammed. We had meticulously put together a programme of speakers that we were sure would keep our delegates interested and focused throughout the day and we are confident that we succeeded. First to take the stand to deliver his talk on ‘Head-only stunning of poultry from a halal perspective’ was Steve Wotton from the University of Bristol. Steve is a longstanding friend of the HFA and his interests include the electrophysical study of animal welfare issues particularly during stunning and slaughter. He delivered a concise, somewhat scientific presentation that was particularly interesting. The incorporation of video helped to highlight the topics he was raising and bring home the subject matter to the audience. Following Steve was the head of Research and Education at animal welfare group Compassion In World Farming – Dr Angela Wright. Her talk was centred on animal welfare compromises throughout the supply chain – irrespective of slaughter method. This was a very important topic and something important to cover in a seminar on halal in the UK – especially with the recent and pertinent halal hysteria that sporadically appears in the media. After Angela, Rizvan Khalid – senior director of Euro Quality Lambs (the largest Muslim-owned lamb abattoir in Europe) took to the podium to discuss improving slaughter methods without stunning. The aforementioned talks were followed by a panel discussion chaired by Dr Phil Hadley, the Head of Supply Chain Development at EBLEX and following a very engaging discussion with an excellent amount of audience participation, speakers were all given awards to thank them for their attendance and thought-provoking discussions. The second session of the day focused more on halal certification issues as opposed to animal welfare. On the panel we had Amina Ahmad, Director at the Dubai Accreditation Centre – discussing the role of accreditation bodies in halal quality infrastructure, Dr Mian Riaz from the Food Protein R&D Centre at Texas University – discussing doubtful food additives being a challenge in halal food processing, Dr Munir Chaudhry of the Islamic Food and Nutrition Council of America (IFANCA) talking about emerging halal markets and last, but by no means least, Dr Linda Amirat of Leatherhead Food Research presenting on GCC Food Laws. All presentations were well presented and finely put together, they brought up excellent topics of conversation amongst our audience and delegates were able to question our speakers; several were after advice and halal suitability of a variety of additives that they were thinking of adding to new products and whether these would be suitable for export purposes to the Middle East. A great opportunity to seek advice from experts in the field. The Q&A session for this segment was chaired by Abdalhamid Evans of Imarat Consultants – who did a fantastic job. Following both presentation segments, a delicious three course meal was served up by Royal Nawaab, a traditional Pakistani feast if we do say so ourselves! Praise for the food was given by many – we were given thanks that we had not put on the usual cold-food buffet that is synonymous with many seminars and conferences in the UK! We are glad that everyone felt suitably fed and watered following lunch. After a half day filled with thought-provoking discussion and with everyone full of delightful Pakistani cuisine, Birmingham Trading Standards delivered a short talk on Halal food fraud and then our award ceremony began. We at the HFA are thankful to all of our clients but we felt it necessary to award our most longstanding clients for their continued halal compliance. Randall Parker Foods, Raj Foods, Unilever UK Limited and Aarhaus Karl Ishamns UK Limited all received awards of recognition for being clients of the HFA for 10+ years and our 15+ years awards were awarded to Kelloggs and Kitchen Range Foods. We take our client relationship and integrity very seriously and felt it imperative to award our clients something from our side to recognise their continued good work. Also given awards for recognition were Halal Focus and the Meat Trades Journal for their exceptional coverage of halal issues in the wider media – something that is integral in this day and age – as well as two of our staff members, Akbar Hussain and Justyna Gorna for their exceptional work for our organisation and unwavering commitment. We asked KFC, Kelloggs and Muntons to deliver a few words before the close of the day, detailing their relationship with HFA, why they opted for HFA certification as opposed to aligning themselves with other certifiers, what halal means to them etc. and these were all delivered with poise – the Kelloggs speech was particularly amusing and lighthearted, it was the representatives first time ever presenting and we think he did a wonderful job! All in all, it proved to be a fantastic event and we are proud that it went off without a hitch. We look forward to organising more events like these in the future and thank all of those that attended and made it into the success that it was.

Presentations from the seminar: